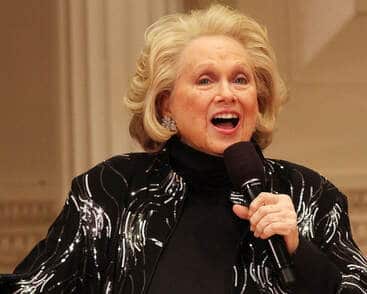 Because of my love for cabaret, I am often asked who is or was the greatest cabaret performer of my experience. The list is not long, half a dozen names at most, but the one who always comes out on top is the late Barbara Cook.

I could, indeed have in the past, written screeds about her musicality, her pure high soprano with no ‘break’, her ability to inhabit a lyric as though it’s occurring to her only at the instant she’s singing it, her wide and deep knowledge of the repertoire so that she’s performing exactly the right song at exactly the right moment in her set, her….I could go on. All this is important, yes, but you don’t need to know any of it to appreciate what Barbara Cook does with a song.  All that matters is the magic that happens when she sings.

In this New York concert, accompanied by her long-time Musical Director Wally Harper, the star of Broadway’s The Music Man, She Loves Me” and Candide performs a memorable evening of songs by the great Stephen Sondheim mixed with songs Sondheim has said he wished he had written.

The Times wrote of her, “Barbara Cook is the greatest theatrical singer in concert at the moment.” And now she is gone, but we still have concerts like this one to demonstrate what one singer, alone in a spotlight, can do. Barbara Cook. Simply the greatest.
Read more