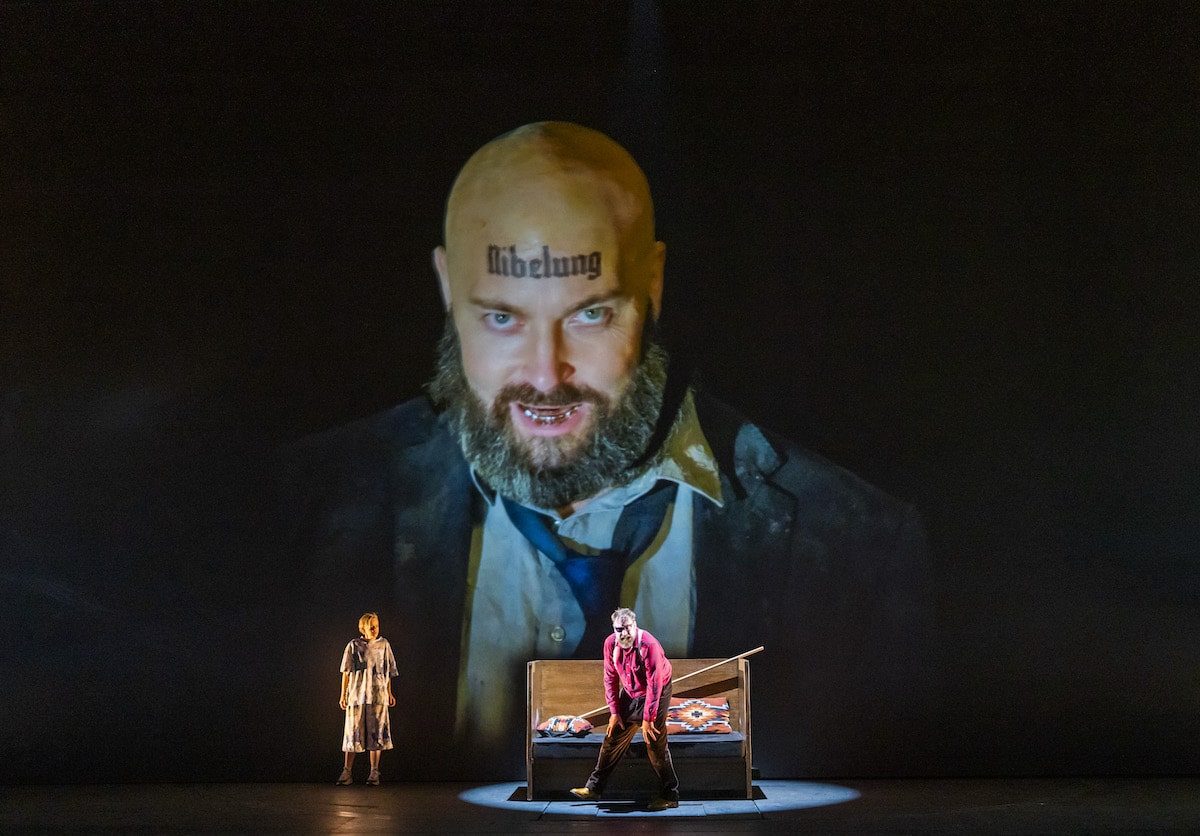 Alastair Macaulay on the Met’s next Ring: Much is missing

Alastair Macaulay attended the opening night of Richard Jones’s The Valkyries at English National Opera, heading soon to the Met. Here’s his exclusive review for Slippedisc.com:

Richard Jones’s new production of Wagner’s “The Valkyrie” deliberately strips this music drama of grandiosity or nobility, while maximizing elements of cartoon comedy. Sieglinde (Emma Bell) wears jeans. Her husband Hunding undoes his trousers to rape her (apparently a regular occurrence) before her knockout drug lays him flat. Brünnhilde (Rachel Nicholls) wears patterned culotte pyjamas. Her father Wotan (Matthew Rose) wears a red anorak; Brünnhilde’s eight Valkyrie sisters wear green anoraks ones. And the Valhalla in which Wotan lives with Brünnhilde and his wife Fricka is a chalet. Wotan has some human-sized Disney-like ravens who move the scenery now and then. The Valkyries have two-legged human-size horses. And there’s a storm imp who dances gleefully on the spot during the storm music.

This production received its premiere with English National Opera on Friday night; five further performances follow until December 10. Much of what happens onstage is traditional enough in observing Wagner’s stage directions. A tree growing in the middle of Hunding’s kitchen, with a sword in it. Brünnhilde puts a breastplate on over her jimjams; she, Hunding, and Wotan carry spears.

More unusually for a modern production – refreshingly – Jones sometimes has his singers simply stand still as they look at each other across the stage space just as Wagner asked. The orchestral music tells us everything about what’s going on inside them. We start to feel the instinctive physical longing as Siegmund (Nicky Spence) and Sieglinde gaze at each other.

When Brünnhilde rushes across the stage to embrace her father Wotan after their long argument, the emotion is intense. Indeed, the fact that the king of the gods is wearing an anorak makes the emotion all the more immediate. During Wotan’s long monologue, his dark counterpart, Alberich, becomes visible here, a huge malign figure but visually enough like Wotan to acquire nightmare force.

The first night had problems. Spence sang – extremely well – despite a heavy cold; Susan Bickley acted the role of Fricka but, thanks also to a cold, silently, while Claire Barnett Jones sang the role from a box beside the stage. Jones had planned some flame effects for the conclusion of Act Three, but these were cancelled, due to Wesrminster City Council’s safety precautions. (It’s to be hoped that later performances provide at least some element of changed light in response to Wagner’s music here.)

The production is carried by its men. Martyn Brabbins conducted with a strong, expansive lyrical current throughout. There are moments when the music would profit from a faster pressure; but this is eloquent playing from a committed orchestra.

Rose sings Wotan like no singer I’ve heard before – my “Valkyrie” experience goes back to the 1970s – with a glowingly bel canto command of glowing vocal tone and keenly communicative diction. In the great long monologue of Act Two, his thought is alive in rhythm (a marvellous propulsive grasp of Wagner’s anapaests), in words, and in changing vocal colour. Nothing is forced; his godly authority is achieved by intelligence, not by overblown weight. And never, even on records, have I heard anyone sing the final two phrases (“Who fears the point of my spear, He’ll never pass through the flames”) with such wonderfully taut, bright, architecture. The topmost note – “spear” (“Speer”) – effortlessly attacked and gleamingly sustained, was the evening’s single most glorious vocal sound.

It’s to be hoped Rose will improve in two ways. He has a bad habit of anticipating the beat. (He stopped doing this when he was in the role’s final paragraphs.) And he often enters important notes by leaning into them without vibrato, before allowing his vocal tone to relax; but, since his vibrato is a light unobtrusive quiver and since he never uses it as a way to scoop up into the eventual note, this mannerism may not prove dangerous. Already he is one of the important and most singular Wotans of our day.

Spence  – another with good diction and handsomely firm vocal lines – establishes the tragic character of the outsider Siegmund by his dark chest tones (Gunther Treptow, one of the role’s finest interpreters on record, came to mind) and by his uncouth, loose-haired, unkempt-beard appearance. I’d say he’s an embodiment of virile pathos, but he’s uneven physically. Though he has a good stage face, its expressions stay TV-scaled, and, though he stands well, his way of running is the opposite of heroic. Vocally, he’s most moving, catching both the character’s psychological desolation and the love that transforms his existence.

While I enjoyed both Susan Bickley’s silent acting and Claire Barnett Jones’s singing, this split-focus effect perforce diminished drama. Emma Bell’s loose vibrato and execrable diction do no favours to Sieglinde. On the few occasions her words are audible, she sounds as if English were her fourth language. More often, the distance between her words and those written on the surtitles is a cause for embarrassed amazement (how did this come to sound like that?) Brindley Sherratt brings dangerous, imposing, vocal heft to Hunding. (reminiscent of Clifford Grant, who sang this role in this company’s classic bygone performances).

Rachel Nicholls, playing the title role with youthful enthusiasm, only gradually settles into vocal form. But none of this opera’s great emotions becomes more powerful than the conflicted love between this daughter and her father. Jones makes their affection begins playfully: Brünnhilde rides on her father’s back like a little girl playing gee-gee. When she observes the love between Siegmund and Sieglinde, she nestles up to them as if she wants a part of it. Finally, as she finds words to explain her great act of defiance against the father she so adores, she comes of age.

The new singing translation, by John Deathridge, has many wonderfully eloquent passages (“As I reigned, I still needed rapture”; “Shy, astounded, I stood in shame”) and some awkward patches of translationese. Much is missing from this production -but the thrilling grip of Wagner’s thought about many layers of existence is never in question.

« Sad loss of a leading harp

Lang Lang thanks Berlin audience for coming out ‘despite pandemic’ »