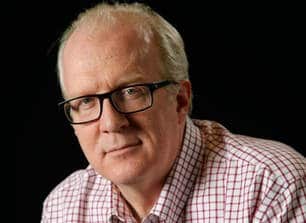 All three virtual plays for $20

Tony & Pulitzer Prize winning playwright & actor Tracy Letts (see photo)  is the author of August: Osage County, Killer Joe, Superior Donuts, Man from Nebraska and more. Here are three new digital plays by this prolific and accomplished playwright who is a long time member of Steppenwolf as actor and writer. Collectively, they run for less than an hour.
Here’s what he says about them, “These plays share at least one thread: a world off-kilter. But since I wrote these pieces, the actual world has undergone some hair-raising transformations, which have cast mysterious new light on these plays. They feel very much like stories for 2021.”

Night Safari
A monologue filmed in a studio location
The nocturnal habits of the Panamanian Night Monkey, the life cycle of the Paradoxical Frog, and the mating rituals of middle-aged male homo sapiens. This wry monologue poses the question: are we so distant from the whims of our biology? Enjoy your tour, and please remember—do not feed the animals.

The Old Country
A filmed vignette, inhabited by puppets
Two men in a diner drain the last drops of their coffees and think about ordering dessert. In the denouement of their (physical, intellectual, and sexual) lives, they wax nostalgic and try to communicate across a wide divide.

The Stretch
A monologue filmed in a studio location
And they’re off, for the 108th running of the El Dorado Stakes! But this race is long-distance… and maybe not what it first seems…

Are you hearing what the organist plays? »