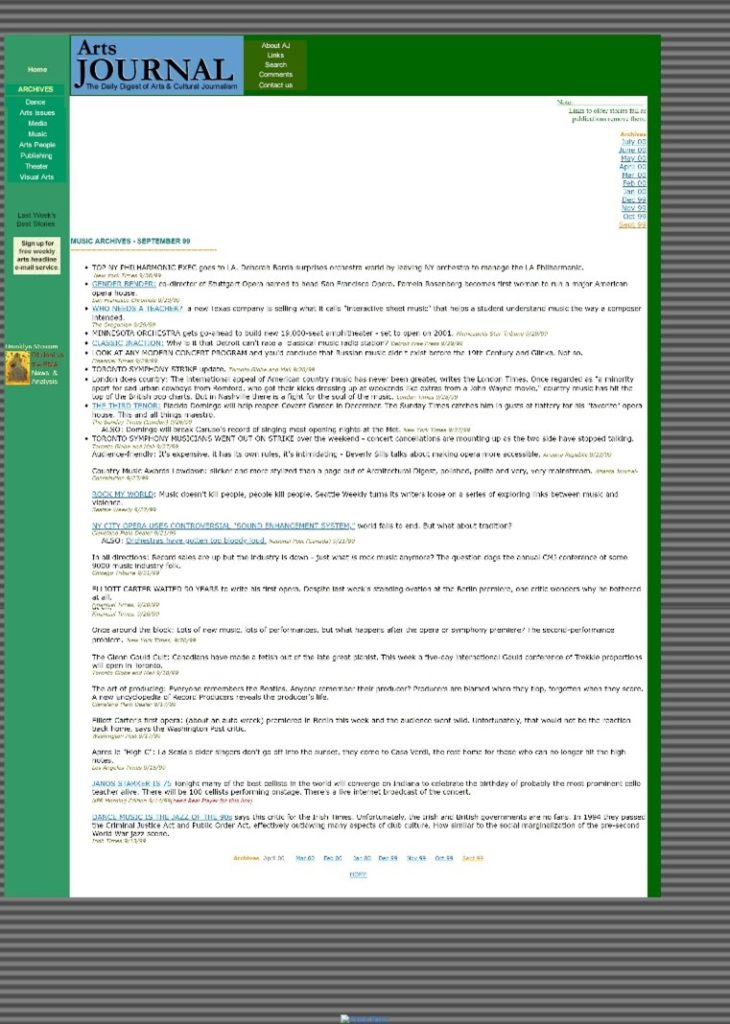 How arts blogs have changed this century

It’s 22 years since Doug McLennan founded artsjournal.com and 20 since he persuaded some leading writers, myself among them, to contribute ideas that were tangential to the stuff we were writing for pay. It was an interesting experiment, and for several of us it took off in different directions, for which Doug deserves great credit.

Here are some of his anniversary thoughts:

In September 1999, one of the first stories we posted on AJ was an announcement that CD sales were at an all-time high — $22.4 billion accounting for 90 percent of all music sales. As first Napster arose (141 stories in the archive), then music piracy (222 stories), downloading (361 stories), then iTunes (308 stories), and streaming (374 stories) took over, annual sales of music fell off a cliff. Today, music sales have climbed six years in a row, totaling about $12+ billion last year, with CDs a sliver of that amount and streaming the dominant format….

Our most-viewed story ever was a thoughtful column in the Toronto Star in 2018 by music critic John Terauds who suggested maybe it was time to retire performances of Beethoven’s Ninth Symphony….

In 2002, we started adding bloggers, many of them well-known arts journalists and figures in the arts, including the late dance critic Tobi Tobias, who was the first online finalist for the Pulitzer in criticism; the indefatigable theatre critic Terry Teachout, our most prolific blogger; Andrew Taylor, a good friend and author of the Artful Manager blog; Greg Sandow, an agent provocateur extraordinaire; the ever-thoughtful Diane Ragsdale, the late much-missed Scott Timberg, who in his own ways tried to record the cultural crash he saw around him; John Perreault, the late great art critic; the rigorous music maven Kyle Gann; jazz chroniclers Doug Ramsey and Howard Mandel; the intrepid and fearless Lee Rosenberg, who writes as Culturegrrl; the irrepressible Norman Lebrecht, the nonpareil coverer of the classical music world; pioneering visual arts blogger Tyler Green; cultural critic Joe Horowitz, who’s produced some of the most incisive writing about culture and where we are during the pandemic; the clear-eyed Michael Rushton and Doug Borwick writing about the culture industries; theatre researcher Lynne Conner; culture chronicler Jan Herman; good friends and cultural historian Jeff Weinstein and architecture critic Jim Russell; dance critics Deborah Jowitt and Apollinaire Sher; David Patrick Stearns, one of the best music critics around; critics John Rockwell and Regina Hackett. Art world reporter Judith Dobrzynski; Orchestra educator Stan Thompson; Radio journalist Chloe Veltmann, pianist Bruce Brubaker, and clarinetist Alex Laing. Also media exec Sarah Lutman, pr queen Amanda Ameer, the indefatigable Matt Lehrman, and irrepressible Margy Waller and Molly Sheridan. Michal Shapiro brought a keen video eye to world music, and David Jays and Paul Levy brought an English perspective from the UK. Sheila Melvin likewise was a keen chronicler of culture in China. Two of our newest bloggers include Aaron Dworkin, who weekly posts his conversations with arts luminaries; and Sunil Iyengar, researcher extraordinaire. Joining the fold in the next week or so is Hannah Grannemann, who will be writing about changing forms of audience engagement. 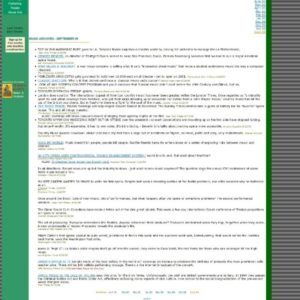