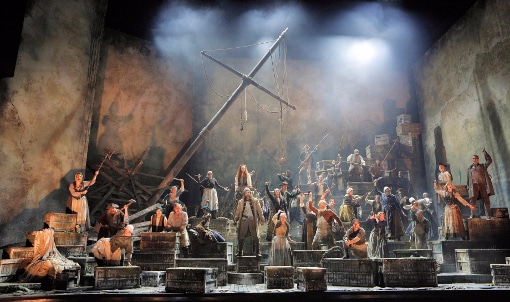 Dame Ethel’s Wreckers gets another chance

Glyndeburne has announced its 2022 season, with battleaxe Dame Ethel Smyth’s The Wreckers leading the line up.

…announced today that works by six female composers, comprising two new operas and a neglected masterpiece, will be staged at Glyndebourne in 2022. Among them is an opera by the pionering feminist composer Ethel Smyth that will open Glyndebourne Festival 2022.

The Wreckers, a powerful, cinematic psychodrama set on the Cornish coast, was the most successful of Smyth’s operas in her lifetime and is an influential work that many people know by name but few have actually seen. Glyndebourne’s production is the first production by a major opera house since 1939 and the first-ever staging of the original French-language version.

Stephen Langridge, Artistic Director of Glyndebourne, said: ‘Ethel Smyth was a serious and important composer, championed by the likes of Thomas Beecham and Bruno Walter. Our new staging of The Wreckers will, in one sense, be a world premiere, because it’s the first time the opera will be performed in French, as she originally conceived it. There’s been lots of sleuth-work involved in putting the original score and text back together again and we’re delighted to be giving this neglected masterpiece its first major staging in over eighty years.’

The production, directed by Melly Still and conducted by Glyndebourne’s Music Director Robin Ticciati, will also break new ground in leading the charge towards making opera in a sustainable way. All of the new productions at the 2022 Glyndebourne Festival will embrace the baseline principles set out in the Theatre Green Book initiative, led by the Theatres Trust and supported by Glyndebourne.

Stephen Langridge said: ‘This show will reinvent the way we think about productions at Glyndebourne. For all of the new productions at next year’s Festival, more materials will be recycled from our stores, with plans for the disposal or reuse of every component agreed in advance with our production teams. It is a major step towards making theatre in a truly sustainable, environmentally friendly way that will make a big difference as we work towards our long-term goal of becoming carbon neutral in our direct operations.’

The final new production in the season is Francesco Micheli’s sumptuous new staging of Handel’s Alcina, which was due to premiere at the 2020 Glyndebourne Festival before the season was cancelled due to the COVID-19 pandemic. Gianluca Capuano conducts the Orchestra of the Age of Enlightenment.