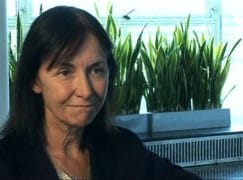 It has been leaked today that Jan Younghusband will leave the BBC this year.

Younghusband has been head of commissioning for music TV at the BBC for 12 years, in charge of both classical and pop.

She has exerted a negativity verging on hostility towards classical documentaries, to the point where many filmmakers no longer bothered to pitch ideas to the BBC.

The BBC says it will now appoint a head of arts and classical music, as well as recruiting a new commissioning editor who will specialise in classical music programming. More jobs, less output.

Younghusband said: ‘I have decided to leave the BBC at the end of this year for a new challenge in my creative life in film-making and TV. It has been an honour and privilege to work with so many outstanding artists, producers, directors and production teams. I would like to thank them all and also my brilliant team at the BBC for their outstanding support and for the many programmes we have created together which have brought great joy to BBC audiences. The BBC is an outstanding cultural broadcaster and the most important pillar of the creative industry, and I will always champion it on the outside as I have done from the inside.’

Before joining the BBC, she was head of arts at Channel 4.