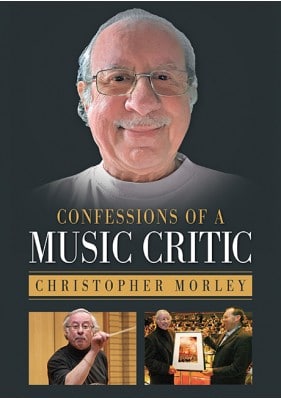 Confessions of a music critic

Christopher Morley, Birmingham’s long-serving music critic and arts editor, is about to publish his memoirs.

We’ve had an exclusive sneak peek of how Chris’s career was almost killed off before it got going. Here’s his story:

There was one huge hiccup during my early days as a critic for the Birmingham Post. Ken Dommett asked me to review a CBSO concert in Birmingham Town Hall, which included a performance of the world’s greatest violin concerto, the Beethoven. The renowned soloist was actually not very good on this occasion, and I said so.

Next day I took a party from the school where I was now Head of Music (St Paul’s Grammar School in Edgbaston — what a relief to be in a convent school after my Walsall comprehensive) to see a production of Carmen at the Coliseum, a trip organised by British Rail, who were doing wonderful things in those days.

I returned very late that night to find the proverbial had hit the fan. Telephone lines at the Birmingham Post had been red-hot all day, complaining that I had identified the wrong soloist in my review! I had said it was Ralph Holmes, when in fact the guilty party was a violinist with a very similar name. These lapses of memory do occasionally happen with reviewers (I know that other of my colleagues have been equally as guilty of a similar lapse), but they are unforgiveable, and the editor of the paper had had no choice but to sack me, in order, apart from anything else, to mitigate the legal consequences.

As luck would have it, Ralph Holmes was due to give a recital at the Barber Institute a couple of weeks later, accompanied by the then Professor of Music at Birmingham University, Ivor Keys. I had never taken to Ivor when he arrived as Prof at the start of my final year there, as I had been totally devoted to his predecessor, Anthony Lewis, who had moved on to become Principal of the Royal Academy of Music in London, but Ivor was very kind to me in this matter.

“I’ll arrange for you to meet Ralph during the interval,” he said, and sure enough, the meeting came about. Ralph Holmes shook my hand warmly, and said “Don’t worry, Chris, these things happen!” and that was that. Tutto apposto, as we say in Italian (did I say I am half-Italian?).

I walked home on air that night — but I was no longer reviewing for the Birmingham Post.

Kirill Gerstein: What I learned from Bashkirov »