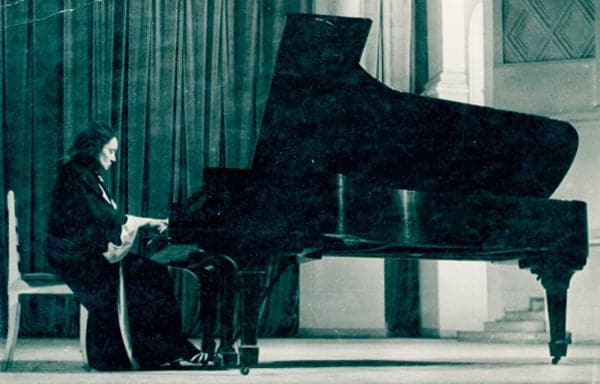 Memories are flooding in of the marvellous Maria Yudina who died 50 yars ago this week. One of the most original pianists that ever lived, she was fired by two Soviet conservatoires and was sidelined by concert organisations, hovering in the shadow of Richter and Gilels. When Stalin sent her a gift of 20,000 rubles for a Mozart concerto she had recorded, Yudina gave the money to the Russian Orthodox church and told the Great Leader: ‘I will pray for you day and night and ask the Lord to forgive your great sins before the people and the country.’

VAN magazine has a new profile of her here.

She was a philosopher, a scientist, a friend of Pasternak and Solzhenitsyn. Here’s an excerpt from an interview she gave to Solomon Volkov three weeks before her death:

When we talk about art (and music is only a part of it, though a beautiful one, in the same way as art itself is only a beautiful part of something miraculous and all-embracing), we anyway run into imperfection of our definitions and poverty of our speech. Yes, we are the poor ones, who want to describe unbelievable riches. And yet we speak (and some people, like me, even write) about it, because we hope to approach towards the understanding of the perfect laws of art and to try to let others approach it, if possible. The understanding of art is being achieved not only in the creative activity, but also in our thoughts and judgements about it. The imperfection here, as I already said, is unavoidable, but it shouldn’t become a barrier and a detention, the living-through of the opinion may serve as an excuse for the imperfection. The opinion should be expressed if it born from a thoughtful, modest and vainless desire to help creativity as we understand it.

I always used an opportunity to address the youth whenever I had it. I’m disturbed with lots of things. For instance, with the fact, that performers wither already at the very beginning of their musical career. They have nothing to say, they are headless horsemen. You’ll always be able to recognize it in their performance – some kind of smoothness, roundness, togetherness – but not the entirety, no – only gloss. But how far is all this from the main thing, which Boleslav Leopoldovich Yavorsky, whom I owe a lot, penetratingly called an “inspired symbolism”, a thing, which (opposes) stays in contrary towards the “score photography”, the thing, which he always despised and pursued.

Formidable as she was in the classics, she had eclectic tastes and a strong interest in modernism.

100 years on, an orchestra repeats its opening concert »