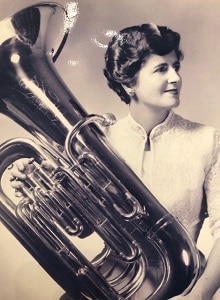 First lady of the tuba has died, aged 88

Connie Weldon, who has died in Miami, was the first woman to play tuba in world-class orchestras.

In 1954, she played under Leonard Bernstein’s baton at Tanglewood Music Festival and never looked back. Next stop was Arthur Fiedler with the Boston Pops. After a stint in the North Carolina Symphony she won a Fulbright Fellowship to study with Adrian Boorsma, principal tuba of the Concertgebouw. While in Amsterdam, she was named principal tuba of Netherlands Ballet Orkest and acting principal of the Concertgebouw.

She later joined the Kansas City Philharmonic, followed by the Miami Philharmonic Orchestra under Alain Lombard, teaching tuba at the University of Miami and forming her own campus ensemble.