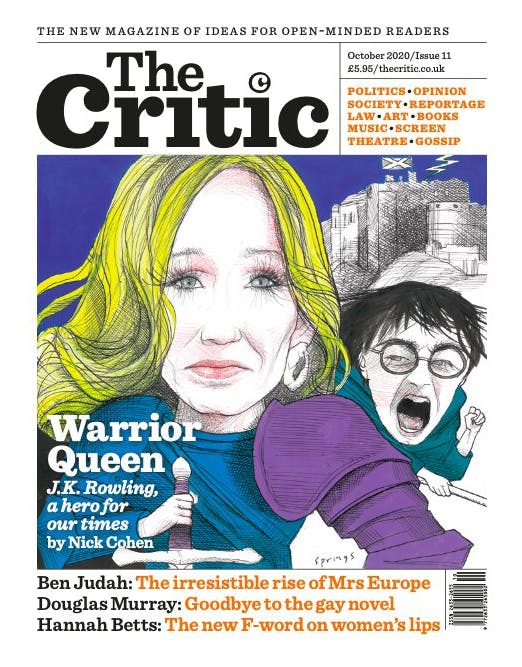 Editorial: The arts have failed us

From the October issue of The Critic magazine:

Where have the arts been during lockdown and why have they so plainly failed by their own lights?

Too much can be expected of art. The cliché that art has become a substitute — or even actual — religion for too many civilised people is a commonplace for a reason: they have mistaken what art is there to do. Which, more often than not, is to decorate life, not fulfil it. Art serves purposes, it doesn’t provide them.

So where has art been during this last half year of our lives? Afflicted, at first, by the physical fears which grasped so many at the start of the Covid crisis, but unlike other more vital activities, which have pushed and hungered to return to their usual places, the arts have not. They have in their own way been as bad as the actual churches, sheltering themselves away from fears they seemingly neither understand nor are able to offer comfort.

The agitprop of half a century, of straining at every legal leash, from the Lord Chamberlain’s blue pencil to the obscenity laws, has led to this empty, wordless stage. Why such conformity? Why have the arts not strained at the bonds laid upon them in the way earthier pursuits and pleasures have?

We have some football but few plays, pubs but little music. Restaurants strain at capacity while those museums and galleries that have reopened severely limit the numbers who can attend. Such timidity speaks to a husk of a culture whose reality is very far from its antique self-conceit. There was more lockdowned rebellion to be found in a public park from teenage children than there was in what must now be seen as “Legacy Art”…