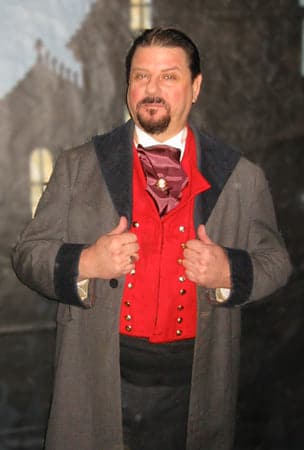 Singers are lamenting the sudden death of the stage director and baritone Nathan Hull, who headed Amore Opera from 2009 and often sang in its productions. He was reportedly listed for heart surgery. Before founding the company he was a computer science professor at New York University. 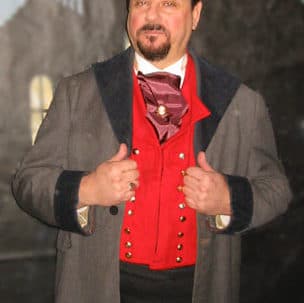 Iris Karlin writes: So many friends around me are hurting the terrible loss of Amore Opera’s father and founder, Nathan Hull. I wish I could help ease your pain and comfort you. The best I can do is offer my Amore Opera family an online meeting , A “wake” if you wish, to console each other with wonderful memories of this wonderful man.
Since there are thousands of souls he had touched, we will have to limit each gathering (not because of social distancing, as it will be online, but in order to offer everyone the opportunity to talk and share). So we will have several “wakes” this week, starting tomorrow, on our regular rehearsals hours (7:30-10pm) and later tonight I’ll send a sign up sheet for people to sign in advance for the zoom call.

Can I ask your help coming up with a great Nathan style or G&S style title to replace the words “zoom wake” ?

Jonathan Dauermann: I’m not sure how many of you are familiar with the name Nathan Hull, but I’ve been trying to figure out all day how to talk about him. Nathan Hull was the founder, leader, and creative lifeforce of Amore Opera, one of a vanishingly small number of independent opera companies in New York City, especially those that use full sets, costumes and orchestra. Nathan staged many opera productions over the course of his career, giving performance opportunities and career boosts to many, many singers. He undoubtedly was planning to stage many more in the years to come.

Nathan died yesterday, very suddenly. If you click on his name, you’ll start to see the outpourings of grief that countless singers, musicians and artists have been posting since this news broke. If it looks like the whole NYC opera scene is mourning his passing, it’s because Nathan Hull was one of the BIGGEST supporters of that scene, a man who made the impossible possible.

Running an opera company is one of the most insanely difficult and seemingly pointless things you can try to do. It will never make money, it will never be easy, it will never be something that makes you famous. Nathan Hull poured his heart and soul into his opera company. He truly, TRULY loved opera, music, theatre, and creating opportunities for everyone else to join in the party and make something beautiful with him. Moreover, he was a kind, warm-hearted, quick-witted presence; he was just a wonderful man, and he made opera and the music he loved possible for many, many people.

For opera singers trying to advance their careers, true performance opportunities are VERY hard to come by. Nathan Hull gave many, many people chances to perform, to do what they loved because it’s what he loved and he was dedicated to sharing it with as many people as he could. I was very lucky to be included in a couple of Amore productions; Nathan helped me move forwards towards my dreams, he created opportunities where none had existed, and he always treated me with kindness, respect and joy. The world needs more Nathan Hulls in it.

To call him a “pillar of the community” feels trite and inadequate. I can’t think of anyone else I met in my opera career who worked harder than Nathan to lift up and support so many other people. The NYC opera community, though I haven’t been a part of it for years now, is a tight circle, a surprisingly small house. Losing Nathan makes me feel like the whole roof has been torn off.

I hope anyone reading this will look into his name, learn a little about his life, and celebrate his memory. I’m grieving for his family and close friends, people who worked with him for decades and love him dearly. He made my life richer and better, just as he did for most all of my colleagues. I will always remember him and be grateful for having gotten to cross his path.

Rest in peace, Nathan. Thank you for everything.

Daniel Kravetz: I first met Nathan Hull in 1980. He was already a member of the Gilbert & Sullivan Society of New York, of which I am now President, and he had just moved to New York City, where his first major assignment was as stage director of PRINCESS IDA at the Village Light Opera Group, using a brilliantly conceived setting of the show in outer space. He directed other VLOG shows, and on two occasions, VLOG’s annual fall G&S show was SCROOGE & GILBERT & SULLIVAN, Nathan’s own adaptation of Dickens’ A CHRISTMAS CAROL. Nathan’s frequent activity in Amato Opera for many years was well known, and when that company announced its imminent closure, my first reaction was to email Nathan, urging him to step in and keep the Company alive with as much of Amato’s people and property as could be salvaged. I’m sure I wasn’t the only one with this idea, and the result was Amore Opera, Nathan’s crowning achievement, which I hope will continue as his legacy. Nathan and I found ourselves sitting together at the Blue Hill Troupe’s MYSTERY OF EDWIN DROOD last November, chatting about our various activities. Not long after that, I decided that what New York needed was a performance of THE PIRATES OF PENZANCE on February 29, 2020, in honor of Frederic’s 41st birthday, produced and conducted by Yours Truly. I was able to throw together a cast of principals, a chorus and an orchestra and rent the Riverside Theater for the occasion, and was delighted that Nathan was able to join us in the role of the Sergeant of Police. He was also in the chorus of pirates in Act I and helped out with the semi-staging of the show. Here is the video of the last performance of a Gilbert & Sullivan Opera in New York City, and the last public performance by the wonderful Nathan Hull: