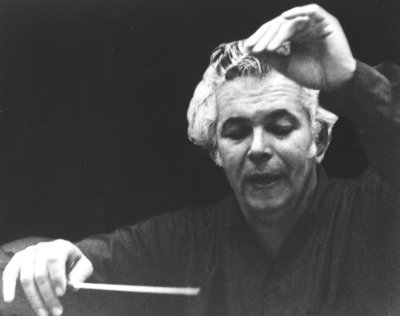 Glenn Gould’s conductor has died at 96

The Winnipeg Symphony Orchestra is mourning the death of its second music director Victor Feldbrill, the youg man whom Glenn Gould entrusted with conducting him in concertos before he took them onto the world stage.

Victor was still conducting in Winnipeg as recently as October 2017.

Here’s an appreciation by WSO artistic director James Manishen:
Mr. Feldbrill led the WSO from 1958 through 1968, succeeding its first music director Walter Kaufman. At the start of his tenure at
age 34, Mr. Feldbrill was the youngest Canadian-born conductor to lead a major Canadian orchestra. Mr. Feldbrill came to the WSO with conditions he felt essential in order to grow an orchestra which would have artistic continuity and build audiences. The musicians were to be employed as a “nucleus orchestra” with a season contract, rather than on a per-service arrangement where each musician had been hired for individual concerts. He insisted that the orchestra undertake an educational committment to introduce orchestral music to young people. The Pops realm also had to be recognized through a series of free matinee programs. And most notably, music by Canadian composers figured prominently in his programs, composers who he knew personally such as John Weinzweig, Harry Somers and others now in the Canadian orchestral mainstream.

Mr. Feldbrill spent his teen years playing the violin, joining the Navy in World War II to play the violin in the Navy Show. After earning his Artist Diploma from The Royal Conservatory in 1949, he enjoyed a highly successful performing career as first violinist in the Toronto Symphony Orchestra (1949-1956). As a conductor, he appeared as a guest leader with virtually every major symphony orchestra in Canada. Following his tenure with the WSO, he became Resident Conductor of the Toronto Symphony Orchestra (1973-1978) and was the first conductor-in-residence at the University of Toronto’s Faculty of Music (1968-1982). Mr. Feldbrill founded the Toronto Symphony Youth Orchestra in 1974 and was its conductor until 1978 and was a faculty member of Tokyo National University of Art and Music.

Even in his 90s, Victor Feldbrill’s dedication to music was unbridled. He was named an Honourary Fellow by The Royal Conservatory in 2014. His biography Victor Feldbrill: Canadian Conductor Extraordinaire by Walter Pitman(Dundurn Press) was published in 2010. Among his many recordings is a live 1959 WSO performance of Brahms’s Piano Concerto No. 1 with Glenn Gould as soloist (available from the WSO).

What really set Mr. Feldbrill apart was his limitless enthusiasm and support of Canadian music and young musicians, as well as his
insistence on playing the music of Canadian composers.  His contribution to music in Canada and the development of essential
organisations and individuals stands as a testament to the power of determination and core belief in the value of music and the arts.

The WSO sends its deepest condolences to his immediate family.

« Classical label grinds back into action