Just in: Placido Domingo, ‘I have never behaved aggressively toward anyone’

The singer has just issued a further statement, clarifying the terms of his previous apology and his dismissal from performances in his hime town, Madrid. Here’s what he says:

Plácido Domingo – México 2.27.2020
I feel I must issue a further statement to correct the false impression generated by my apology in some of the articles reporting on the AGMA investigation.

My apology was sincere and heartfelt, to any colleague who I have made to feel uncomfortable, or hurt in any manner, by anything I have said or done. As I have said it repeatedly, it was never my intention to hurt or offend anyone.

But I know what I have not done and I’ll deny it again. I have never behaved aggressively toward anyone, and I have never done anything to obstruct or hurt anyone’s career in any way. On the contrary, I have devoted much of my half century in the world of opera supporting the industry and promoting the career of countless singers.

I am grateful to all the friends and colleagues that, up until now, have believed in me and supported me through these difficult moments. In order to spare them harm or any additional inconvenience, I have decided to withdraw from my upcoming performances of La Traviata at the Teatro Real in Madrid.

Furthermore, I will withdraw from the engagements in which theaters and companies find it difficult to carry out those commitments. On the other hand, I will fulfill all my other commitments wherever circumstances permit it. 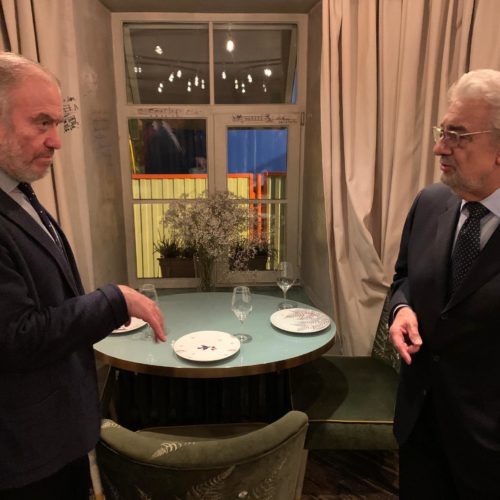 With Valery Gergiev, this month in St Petersburg