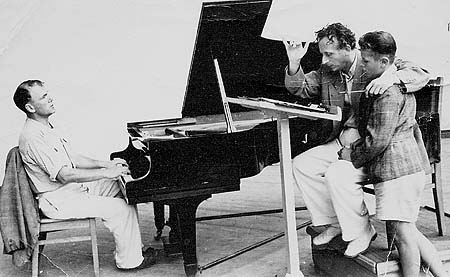 ‘Better one good concert less than one bad concert more’

This was Mariss Jansons’ motto, received from his father and repeated often.

I took it down 20 years ago and have held it up ever since as an ideal for conductors. Sadly, few apart from Mariss took heed.

… his professional outlook had been fully formed before he left the Russian crucible. “The atmosphere was so pressured,” he relates. “Mravinsky demanded such high standards, everybody was afraid to fall below. There was Richter, Gilels, [David] Oistrakh – such quality.” Unalloyed excellence was to be his benchmark, to which his father added a telling motto. “Mariss,” said Arvid Jansons, “remember: better one good concert less than one bad concert more….”

Mariss to the Pittsburgh Post-Gazette: ‘This is Sviatoslav Richter and my father rehearsing when the Leningrad Philharmonic was at its summer home. It was around 1953. I knew all the artists very well; they were very good friends with my father. It was a family there in the summertime. We all lived for two months in a hotel, so we spent breakfast, lunch and dinner together. Of course I didn’t speak too much because I was quite shy. Since I studied music, it was all so interesting. I was all the time in the musical atmosphere … and I learned intrigue, bad things, things behind the scenes.’