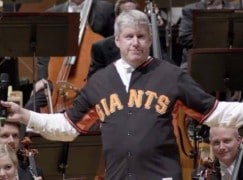 Michael Stern, who recently announced his departure from Kansas City in 2023, has taken on an extra job at the Stamford Symphony, in Connecticut. His five-year term will start in 2020.

Stern, 59, said: ‘In the heart of every musician, first and foremost, you want to make good music, express yourself and make the music land. Music is communication and you want to make it land — I felt that here.’

The CEO who signed him is Russell Jones, former head of the British ABO.

Stern will also continue as music director of IRIS orchestra in Tennessee, his third job.

His additional reasons for taking Stamford is that he is raising two daughters in Old Greenwich, the neighbouring town, and that many of the Stamford musicians are professionals from the Met, St. Luke’s, Orpheus and Broadway.

« A dose of Dutch courage for Placido Domingo

CBSO100: With Mirga, there’s something unexpected in every concert »