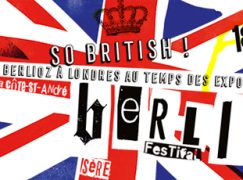 Plans have been released for this late-summer’s Berliner Festspiele. The core participants appear to be British.

On the occasion of the 150th anniversary of Hector Berlioz’ death, the 2019 Musikfest Berlin will celebrate the French composer. Taking his music and visionary ideas as a point of departure, the festival will present a programme that highlights French and European Modernism. The spectrum will range from Jean-Philippe Rameau via Arthur Honegger, Edgard Varèse, Olivier Messiaen, Iannis Xenakis, Gérard Grisey to contemporary composers: Peter Eötvös from Hungary, Olga Neuwirth from Austria and Louis Andriessen from the Netherlands. The festival will dedicate a focus of several concerts to each of these three.

After a concert before the opening, a long piano night featuring a performance of the complete “Catalogue d’Oiseaux” by Olivier Messiaen, the 2019 Musikfest will be launched on 31 August with Hector Berlioz’ opera comique “Benvenuto Cellini”. The Orchestre Révolutionnaire et Romantique and the Monteverdi Choir will present the semi-staged performance on historic instruments and under the musical direction of their founder Sir John Eliot Gardiner. Apart from further large-scale works by Hector Berlioz – the “Symphonie fantastique”, “Roméo et Juliette”, “Harold en Italie” and excerpts from “Les Troyens”, the composer’s concept of gigantic orchestrations will be manifest in several concerts during the festival, with large orchestral formations filling the podiums: the performance of “Frau ohne Schatten” by Richard Strauss by Rundfunk-Sinfonieorchester Berlin, Alfred Schnittke’s first symphony with Münchner Philharmoniker and Valery Gergiev, “Amériques” by Edgard Varèse with Berliner Philharmoniker and Peter Eötvös as well as “Éclairs sur l’Au-delá” by Olivier Messiaen, the first performance by the London Symphony Orchestra in Berlin together with its Music Director Sir Simon Rattle. In addition to orchestra and chamber music concerts as well as operas in semi-staged and concertante performances, the world premiere of the restored seven-hour version of Abel Gance’s silent film “La Roue” will be presented at Konzerthaus Berlin. Furthermore, the famous company of the Umewaka Kennokai Foundation from Tokyo will visit the Philharmonie to perform Nō-Theatre from the 15th and 17th century on the occasion of the 25th anniversary of the city partnership between Berlin and Tokyo as well as the 50th anniversary of the Japanese Cultural Institute.

Apart from the Orchestre Révolutionnaire et Romantique and the London Symphony Orchestra, Great Britain’s first radio orchestra, the BBC Symphony Orchestra will travel to Berlin from London, together with its Chief Conductor Sakari Oramo. As the second ensemble dedicated to historical performance practice, the Parisian orchestra Les Siècles and François-Xavier Roth will celebrate the orchestra’s Musikfest Berlin-debut and its first performance at the Philharmonie. On their last European farewell-tour together, Zubin Mehta and the Israel Philharmonic Orchestra will stop off in Berlin. The Royal Concertgebouw Orchestra Amsterdam with Tugan Sokiev will come from the Netherlands, Münchner Philharmoniker with Valery Gergiev from Munich, both Junge Deutsche Philharmonie with Jonathan Nott and Ensemble Modern with Brad Lubman from Frankfurt. Ensemble Musikfabrik will arrive from Cologne with Peter Eötvös, who will also feature as a guest-conductor with Berliner Philharmoniker in a performance of “Alhambra”, a violin concerto Eötvös wrote for Isabelle Faust. Berliner Philharmoniker will be heard once more during the festival, under the musical direction of Daniel Harding, and the Karajan-Akademie will join the festival for the first time, conducted by Susanna Mälkki. Other prominent orchestras from Berlin featured in the programme of the 2019 Musikfest Berlin are Deutsches Symphonie-Orchester Berlin with their Chief Conductor Robin Ticciati, Konzerthausorchester Berlin under the musical direction of Juraj Valčuha, Orchester der Deutschen Oper Berlin with General Music Director Donald Runnicles and Rundfunk-Sinfonieorchester Berlin with Chief Conductor Vladimir Jurowski.

Musikfest Berlin will take place from 30 August to 19 September. During the 21 days of the festival, 26 events featuring more than 65 works by 30 composers will be presented at the Philharmonie and its Chamber Music Hall. Overall, 22 orchestras will contribute to the festival. More than 50 international soloists will come to Berlin, including the singers Susanna Andersson, Alice Coote, Nora Fischer, Juliet Fraser, Susan Graham, Barbara Hannigan, Andrew Staples, Yuko Kakuta, Georg Nigl, Shenyang und Klaus Florian Vogt and the singers featured in the first-rate ensembles of the opera performances. Further soloists: trumpeter Håkan Hardenberger, the flutist Emmanuel Pahud, pianists Pierre-Laurent Aimard, Alexander Melnikov and Olga Pashchenko, violinists Isabelle Faust, Gil Shaham and Valeriy Sokolov as well as violist Tabea Zimmermann. The IPPNW-Charity Concert presented by the WuWei Trio will take place on 22 September at 16h at the Chamber Music Hall.

Broadcasts of as many as 16 concerts of Musikfest Berlin 2019 are planned as well as the “Quartett der Kritiker” of Deutschlandfunk Kultur and rbb Kulturradio. The festival’s other media partners are FAZ, Exberliner and Monopol.

Ex-tenor will go to jail »