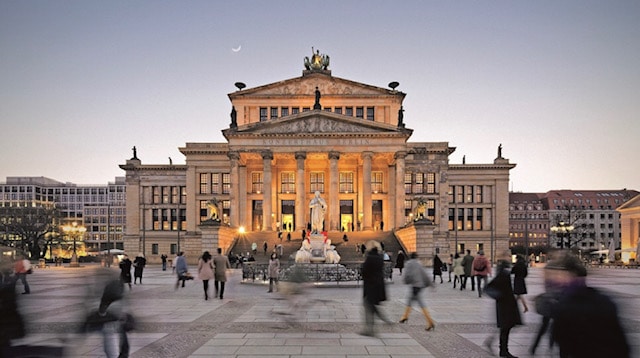 Our quartet tours were cancelled so we could study Marxism

Our diarist Anthea Kreston has been talking this week to Tim Vogler, leader of a string quartet in the former East Germany, on how musicians balance art with political pressure. Fascinating revelations.

Do we have a duty, as musicians, to address the wrongs of the world? The forgotten, the mistreated, the plagues, the wars, the atrocities? The music we learn, perform – a large percentage has no clear meaning, but much does have meaning – connotations (from the underlying illness of Schumann to the Shostakovich 8th quartet). And as performers, we need to understand the subtext, we need to believe in the truth of the intangible sounds and be able to convey that base belief to the audience.

This week, we are talking to the Vogler Quartet – 34 years ago, behind the wall, these 4 young men made history – they, through sheer determination and creativity, found, time and again, a path through and around that Wall. This week – a recent discovery of a packet of unread letters from a grandmother to her infant grandson – and now, music put to words never spoken. The words of a woman lost at Auschwitz, to a grandson never met. This is the work that the Vogler presented this week at the Konzerthaus at Gendarmenmarkt, and I was fortunate to be able to listen, and to speak with members of the quartet about their work, their choices.

Last year, I had the pleasure of playing several mixed chamber concerts with Stephan Forck, the cellist of the Vogler Quartet. He was formal – quite poised – tall, slender, handsome and somehow from a different world. As if his Homburg hat and worsted wool suit just happened to be at the cleaners. He playing was tender, intellectual, smart, and he was, in his own determined and quiet way, completely open to the other members – ready to adjust and find a new path together.

During that week, we started to find each other sitting together more often, or taking an extra turn around the block before coming back to rehearsal from lunch. What he began to tell me, about his life growing up in East Germany, the struggles and triumphs of a quartet behind The Wall, was fascinating. And so we have kept in touch, and although I was unable to attend their most recent concert at the Konzerthaus in Berlin (where they have a series), he and his colleagues were kind enough to allow me to come to their dress rehearsal the day before. They were 4 men, so at ease with one another – finishing each other’s sentences (both verbal and musical) – each with a clarity of vision and honesty. It was a beautiful sight (and sound). Their program was stunning – and I was able to find the time to speak with Tim Vogler, first violinist.

Anthea Kreston:
Can you tell us about what it was like forming a quartet in the GDR? After the wall came down, how did things change for you all?

Tim Vogler:
The members of Vogler Quartet have all been growing up in GDR, former East Germany, in East Berlin. In the Berlin Hochschule “Hanns Eisler” we all met. My education there started 1983, and I remember my and Franks violin teacher (Eberhard Feltz) saying, both of you should be playing string quartet. We thought about it and started with a few sessions in January 1985. Since then the four of us play together, Tim, Frank, Stefan and Stephan. Nobody was assuming our connection may last longer then a certain time, and certainly not 34 years, but somehow very quickly we started working seriously and, after having prepared our first international competition carefully, which we won (Evian)….suddenly we found ourselves in the position to be one of the most promising young quartets at this time. All of a sudden we had so many concerts, more then our smallish repertoire could manage without any problems. Anyway, we had a great time, making western money and living in a  bubble between East and West.

We earned West German money, the D-Mark, and would have to exchange parts of it into DDR-Mark, some parts where kept as provision, but 60% or so went into our pockets, anabling us to lead a great life, including a quartet car, imported from the Western part of Germany, to enable us to go on tour. Which we did…every West German promoter got 1000 Marks extra for engaging us, I think, by the state to substitute our appearance there. So we really started touring, West Germany, France, Ireland, Italy. Great Britain.

We had one critical year around 1988, where we lost our permission to travel to western Europe for concerts, because the Hochschule had a new president, who stopped all concerts and forced us, to finish our studies first, including lessons in communism, sports, philosophy….most of the subjects were strongly connected to the socialist ideology of East Germany. But we finished within that year and afterwards we had sort of a free passport. Concert offers came still in. We even could spend 6 months in the US, Cinncinati, for studies with the famous Lasalle Quartet. That was very unusual at that time, and made us feel proud and sad at the same time, since none of our friends could experience similar things.

When the wall came down, things did for us not change quickly but slowly. Our status as an East German Quartet, travelling world wide, was a very special one. After the “Wende”, the wall came down, we became just one German quartet among others. We lost our exclusivity. Which was hard, all of a sudden we had to search how to prove our quality, how to be recognized, how to find enough concerts to live a professional musician life combined with a family life, including all the children we got in between. Our musical education in the East was strongly supported by the government. Musicians were seen like athletes, they were supposed to bring home medals they won in competitions.

Anthea Kreston:
The piece you performed, “Letters from Lony”, for string quartet, piano and mezzo, was written by Ronald Corp. In the 1970‘s, when sorting through the estate of his recently deceased mother, Peter Lobbenberg (who is British) found a bundle of 22 letters from his Jewish German grandmother, who had perished in Auschwitz. He had them translated, and was shocked to find these letters had been written to him from 1939-1944, from a grandmother he never met. Wanting to find a way for this unexpected voice to be heard, he commissioned this Sextet, which was premiered in England with the Chilingrian Quartet. The Vogler heard about the work, and chose to present it at the Konzerthaus Berlin, in the historic East Berlin Gendarmenmarkt. Can you tell us about the new piece? What is the role of musicians in political or historical statements? What does it mean for a German Quartet, in 2019, to play this piece?

Tim Vogler:
This project was indeed extra special, since those letters were written by Lony Rabl, who emigrated 1938 from Berlin to Amsterdam and was then deported to Theresienstadt. The letters speak about Lonys daily life and the increasing struggle and depressive situation for her. The music is very touching. And, as a German, to dig into the tragedy of a personal life at this time, caused by our ancesters, is nearly heartbreaking.  The industrial killing during Nazitime in Germany can sometimes seem to be so abstract until we look into the single fate by specific people. Lony is one out of millions, but we can feel her and remember her. This is truly important, not to forget! During the concert it was a completely quiet in the audience, we could all feel that we were there together.

So the Beatles were closet Zionists? »