The Orchestra of the Age of Enlightenment in the Daily Telegraph:

In the hope of breaking down century old barriers between an orchestra and its audience the performers will step up to the front to talk about the piece they are about to play, its history, how the rehearsal process has impacted on the finished piece and what it means to them. The orchestra’s conductors will also introduce themselves and the music,

The first concerts to be staged in this innovative way will be a performance of Brahms’ Requiem and Vaughan Williams’ Fantasia on a Theme, to be conducted by Marin Alsop at Basingstoke Anvil on Saturday and the Royal Festival Hall, Southbank Centre, on Sunday, marking the 100th anniversary of Armistice Day.

Before the concert begins Maggie Faultless, the OEA’s lead violin, will introduce the music from the stage.

She said: ‘Not everybody has a programme or wants to read one and so what we’ll say before we play will be significant. It will be a case of putting the music into context and explaining why its being played in one way and not another and how that has come out of the rehearsal process…..’

So what orchestra players say off the cuff is bound to be more ‘significant’ than the learned programme note? If that were the case, why don’t more orchestras get their players to write the notes? It would be a darned site cheaper.

Professor Faultless, by the way, teaches at Cambridge and blogs for the Guardian, so she’s not your average tongue-tied front-desk violinist. 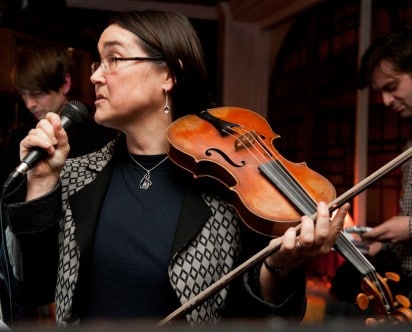