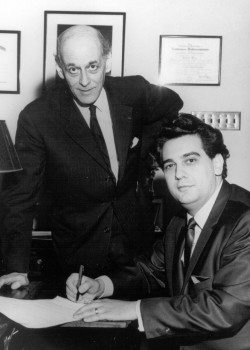 Placido Domingo: How I got called in for my Met debut

The Spanish singer is marking his 50th anniversary at the Metropolitan Opera. He recalls his debut in a house interview with William Berger:

Let’s go back to that night, your Met debut on September 28, 1968, in the role of Maurizio opposite Renata Tebaldi in Adriana Lecouvreur. You were supposed to be making your debut in the same production a few days later, but when Franco Corelli fell ill, you stepped in at the last minute. What do you remember about that night?

‘We used to live in New Jersey in those days, and that Saturday afternoon, I had been rehearsing here at the Met, because I was covering Calàf in Turandot. I went home to New Jersey after the rehearsal, and about an hour after I got back—I guess it was about 7:15PM—Mr Bing [pictured with PD] called by phone, and said, “Plácido, how are you doing?” I said, “Fine, Mr Bing.”

‘He said, “Well, I hope you really are fine, because you are making your debut at the Metropolitan tonight.” I said, “Oh, my god,” and I got back in the car with my father, who was staying with us. Coming off the West Side Highway at 72nd Street, we were stopped at the light—and I was vocalising in the car. I noticed a car nearby and the people inside were laughing at me because I was singing. I put down the window, and I said, “Excuse me, where are you going?” And they said, “We are going to the Metropolitan Opera.” So I said, “Well, don’t laugh, because you’re going to hear me tonight!” I was nervous, but so excited. And the most difficult part was not the debut, but to be in the shoes of Franco Corelli.’