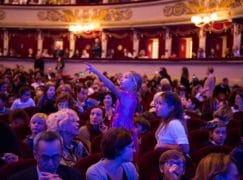 See opera in Italy for 2 Euros

From the Italian news agency, ANSA:

Young people between 18 and 25 will be able to go to La Scala for two euros starting with the next season at the iconic Milanese opera house, Culture Minister Alberto Bonisoli said Tuesday.

The minister made the announcement after meeting with La Scala Superintendent Alexander Pereira. ‘It’s an initiative aimed at the new generations who often consider culture with scepticism or because they experience malaise, culture is not a solution but it can help,’ Bonisoli said.

The plan has been proposed to Italy’s other 14 opera foundations and they have all accepted, he said.

In other reports, La Scala said it would hold 100 seats for young people at 2 Euros for 15 opera nights, 7 ballet.