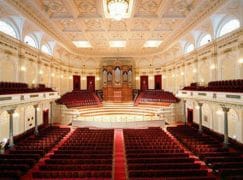 Why the Concertgebouw fired Gatti

The main reason is contained halfway down this morning’s announcement:

Since the publication of the article in the Washington Post, a number of female colleagues of the Concertgebouw Orchestra reported experiences with Gatti, which are inappropriate considering his position as chief conductor. This has irreparably damaged the relationship of trust  between the orchestra and the chief conductor.

The sub-reason is the secondary clause.

We have been hearing lately of deteriorating relations between the orchestra and its Italian conductor. Whether the sexual element is a contributory factor cannot be ascertained, but C’bouw players have been telling us of a poor atmosphere and lack of mutual trust, as well as general boredom at work. The initial attraction did not last long.

Gatti, 56, will not struggle to find freelance work around the world, starting in Japan and China.

The C’bouw, however, will be hard pressed to find front-line conductors at no notice to take over his concerts, let alone a credible successor as music director. This will be a major challenge, and a turning point, for the orchestra.

« Breaking: Daniele Gatti is fired by the Concertgebouw