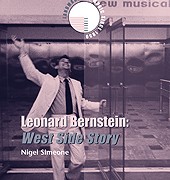 BBC Proms goes for US cast in West Side Story

The intended Maria for the Proms showpiece pulled out because the cast was not Latino enough.

Others wondered why the BBC needed to import Americans when plenty of Brits can sing Bernstein’s show. The typecasting is simply unnecessary and often ridiculous.

As ever, the BBC took public concerns abroad.

It is proceeding with an all-American cast.

The BBC Proms are pleased to announce the cast for the two concert performances of Bernstein’s West Side Story at the Proms on Saturday 11 August, led by John Wilson and the John Wilson Orchestra.

Leading the cast will be Mikaela Bennett as ‘Maria’ and Ross Lekites as ‘Tony’. Mikaela, a recent graduate of The Julliard School, has made her debuts with the Philadelphia Orchestra and New York Philharmonic’s Young People’s Concerts in performances of West Side Story, as well as taking part in Bernstein on Broadway at the Kennedy Center, a concert celebrating the centenary of his birth. Ross Lekites will perform the role of ‘Tony’, a part he has sung many times in the US but brings to the UK for the first time.

Actress and singer Eden Espinosa, best known for her performance in the musical Wicked, performs the role of ‘Anita’, whilst Leo Roberts, most recently seen in the West End production of Evita, plays ‘Riff’ and Gian Marco Schiaretti joins the line-up as ‘Bernardo’.

« Which composer leaves us ‘staring at the ceiling, wondering when it will be over?’

Do we want a luxury trip to a $100m new classical festival? No thanks… »