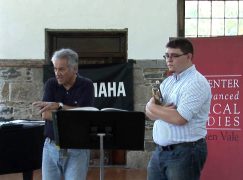 Friends are sharing memories of Thomas Stevens, principal trumpet of the Los Angeles Philharmonic from 1972 to 1999 and an instrumental pioneer for whom Luciano Berio wrote Sequenza X. He recorded Maxwell Davies, Henze, Bernstein, a whole generation.

Tom was a huge personality and a vastly influential teacher. He was about to turn 80 this month.

Markus Stockhausen writes: Farewell for ***Thomas Stevens***, fantastic (principal) trumpet player from Los Angeles, teacher, composer, who passed away on July 14th, 2018. Thanks dear Tom for so many beautiful and inspiring moments together.

Ryan Bancroft writes: I’ve only ever had three trumpet teachers in my life, one of whom has now left us. I am deeply saddened by this fact. All the love that I can muster to his family, our musical community, and the trumpet family that he monumentally fostered and loved so fiercely.
Tom Stevens. I love you.

I once played a private audition for a well-known conductor. I won’t say his name because he is still alive and facing his own “me too” moment. He was looking for someone to play Co-Principal Trumpet with his aging Principal Trumpet player. I had trained for years on excerpts, getting really intense during my years at The Curtis Institute of Music. I was playing Principal Trumpet in a major European city. The private audition ended up being witnessed by a full symphony orchestra and local press. My current conductor told this well-known conductor everything about me except one thing – the color of my skin. The look on his face when I walked into the room was priceless. He wanted to cancel the audition before I played a note, but there were literally reporters in the room and it was too late to turn back. It was the best audition I had played up until that point. The conductor’s colleague took me aside afterward and said, “if this audition were for Berlin Philharmonic, he would hire you right now as Principal Trumpet, but famed American trumpeter XXX XXXXXXX will never sit next to a black man as his equal.” Fast forward one year and I am sitting in a restaurant with Thomas Stevens in a southern European city. I told him about the audition. He knew XXX XXXXXXX personally. Tom laughed and said. “Yeah, XXX XXXXXXX would likely say that you play really great for a black guy! He certainly would never sit next to you as his equal.” Up until that moment, I still was not sure about what had happened with that private audition a year earlier. Stevensconfirmed it and he did not have to do that. He helped put me on a path where I would continuously try to improve while ignoring outdated notions about who was capable of what based on race, gender, national origin, etc. Thanks and RIP Thomas Stevens. You were always ahead of your time. I will continue to share your beautiful recordings with students and I will always be grateful for your upfront and forthright manner of dealing with the truth.