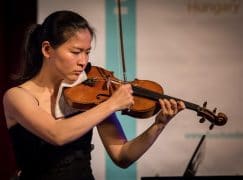 Nagao Haruka, 29, from Japan has been declared winner of the much-diminished Carl Flesch Violin Competition in Mosonmagyaróvár, Hungary.

The competition is supposedly open to artists based in Europe. Neither Haruka nor Eryu is resident in Europe.

UPDATE: We have now ascertained that six out of 11 semifinalists were students of jury members. The winner Nagao Haruka studied with the jury president Eszter Perenyi.

Just another stretch of competition credibility.