Hired as principal trombone for the Kansas City Philharmonic, he gave up after seven years to help out his father in Cleveland as a bricklayer and stonemason.

Szell heard him play as a substitute and, six years later, called him into the Cleveland Orchestra. 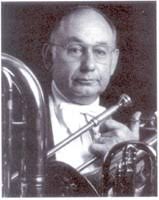