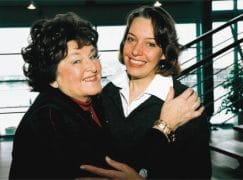 Birgit Nilsson Foundation President Rutbert Reisch announced today in Stockholm that the ($1 million) Birgit Nilsson Prize for 2018 will be awarded to Nina Stemme. The Prize Award Ceremony will take place in the presence of Their Majesties King Carl XVI Gustaf and Queen Silvia on October 11, 2018 at the Royal Opera House in Stockholm, Sweden, at which time the Prize will be presented by His Majesty. At the ceremony, the Royal Opera Orchestra led by American conductor Evan Rogister will accompany renowned Welsh bass-baritone Bryn Terfel and Swedish soprano Christina Nilsson.

Also announced at the press conference, the Birgit Nilsson Foundation will be transferred in January 2019 to the care of the Royal Swedish Academy of Music in Stockholm.

Upon receiving news of the Birgit Nilsson Prize, Nina Stemme commented, “It is a great honour to be recognized for my work, but it is even greater to be recognized in my home country by a world-renowned organization that bears the name and carries the legacy of a legend…my idol Birgit Nilsson. As this is her centenary, receiving this award becomes a most humbling and extraordinary honour. I am very grateful to be connected with this great lady and to be in the company of Maestro Domingo, Maestro Muti and the Vienna Philharmonic, all of whom have previously received this extraordinary award.”

The judges, who serve for renewable three-year periods, have remained the same for 2011, 2014 and 2018. They are:
Bengt Hall, former Managing Director of the Malmö Opera, and former General Manager of the Royal Swedish Opera Stockholm
Eva Wagner-Pasquier, former Co-Director of the Bayreuth Festival
Clemens Hellsberg, former President of the Vienna Philharmonic
Rupert Christiansen, Opera Critic of the Daily Telegraph and Member of the Editorial Board of OPERA
Speight Jenkins, former General Director of the Seattle Opera.

« Death of a trend-setting opera director