Death of a trend-setting opera director

La Monnaie has announced the death of Karl-Ernst Herrmann, one of the signature discoveries of the Gerard Mortier era. He was 81.

Brought to Berlin by Peter Stein in 1971, he worked as a designer with Claus Peymann and Luc Bondy before making his director debut in Brussels in 1982 with La clemenza di Tito. With his wife Ursel, he went on to make productions for the Salzburg Festival, Baden-Baden, Berlin and Vienna State Opera and many more. 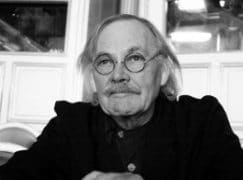