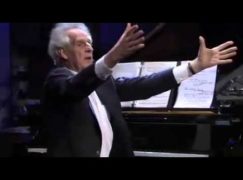 Will this be the fastest Beethoven Ninth on record?

The Boston conductor Benjamin Zander thinks everyone else conducts it too slow.

So he has recorded the symphonic Matterhorn with the Philharmonia Orchestra and Chorus for release in July. He will furnish it with a discussion disc running 160 minutes, which will make the symphony seem very short indeed.

Here are his thoughts on the subject: 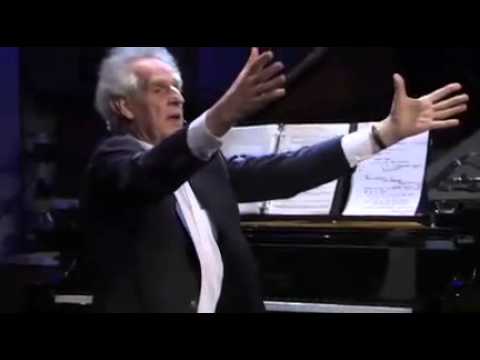 There are indeed many recordings nowadays that claim to have followed Beethoven’s intentions in the matter of tempo, but none does so completely. Not even close! However, it is not only matters of tempo that are addressed in this recording.

*   In the slow movement there is fanfare (bar 121) with horns and trumpets doing everything required of a fanfare.  The bassoons and the basses provide the bass:

So, of course, he couldn’t use the drums, though it is a moment that cries out for trumpets AND drums.  On our recording we have simply provided the notes that Beethoven didn’t have at his disposal, so that the passage makes sense!

The way the part is written, leaving out the timpani until it goes to the F, could not possibly be what Beethoven wanted. The fact that he includes the drums for just one brief moment proves he wanted the timpani to be part of the fanfare. It’s just that, for practical reasons, he couldn’t have what he wanted! We have provided him with the solution and he is posthumously delighted.   How can you have a military fanfare without the drums? I can see him shouting at conductors from his lofty perch “Du Esel! Put in the bloody timpani notes!”

Once pedal timpani were introduced, he would have assumed that the timpanist would have added those notes without thinking, but none of them do. We are urged to be purists and to respect Holy Writ, however nonsensical.  I imagine that Beethoven must have been screaming at conductors for nearly two hundred years about all sorts of things, but so few have heeded him.  Even Toscanini and Karajan, who don’t hesitate to retouch Beethoven in other places, (Karajan performs the Ninth with 8 horns, when 4 are enough to do the job), don’t make this obvious change.

So, now let’s go back to the tempo issue at this particular moment.  Since no one takes Beethoven literally when it comes to the tempo of the 12/8 section of the slow movement  – and I mean no one!  the fanfare usually sounds nothing like the bracing event bristling with energy and majestic impatience, that Beethoven intended: (at 39.38).

It can only be effectively rendered if the timpani plays throughout and Beethoven’s tempo is observed.

There are many other passages in the score which have been “restored” in this way. Flute and bassoon notes that could not be rendered accurately on instruments of his day are allowed to take their natural shape, avoiding awkward and uncharacteristic leaps (i.e. forced errors). Probably only devoted amateurs and professional musicians will notice these changes, but they are significant and satisfying nonetheless.

While we are on the subject of Beethoven’s tempos, here is a link to a coaching session with a string quartet on the first movement of op 95. I think it demonstrates more clearly than any arguments can, what Beethoven’s tempi do to us. I urge anyone who wants to understand the very raison d’être of this approach to watch this encounter. https://www.benjaminzander.org/videos/interpretation-beethoven-string-quartet-no-11-op-95-serioso-mvt-1/

Look at the body language – of the players and the audience.  It’s as if a shot of electricity has coursed through their bodies. The initial tempo at which the quartet starts is fine, normal, acceptable, even quite exciting, but NOTHING COMPARED TO WHAT BEETHOVEN WANTED.

It’s as if Beethoven has sent us a letter telling us to PLEASE pay attention.  As in a treasure hunt, you have to follow ALL the clues

*  Near the end of the Finale there is passage of staggering grandeur that has, we believe, never been correctly rendered.

The Maestoso passage at 916 has 32nd notes in the strings which become transformed in to 8th notes in the next section. If it is performed correctly, the chorus sings the words Götterfunken twice EXACTLY the same: “Götterfunken, Götterfunken”. But you can hunt far and wide and not find one rendition of this passage performed the way Beethoven intended.  There is a simple reason: the Maestoso is invariably played well under Beethoven’s tempo, therefore making a correct connection with the following section impossible. (There is a mash-up on YouTube of Furtwängler from 11 different recordings of this passage. On every one of them he makes the same error, causing confusion for the singers and the listener).  Beethoven would have undoubtedly been furious with this kind of carelessness with the rhythm of his music.

*   An equally striking mistake is regularly perpetrated at the join between the Scherzo and the Trio.  This requires an acceptance that Beethoven knew what he was doing and meant what he intended, though his intention has been universally ignored on the grounds that it is unplayable.

All of this is thoroughly explained on the Discussion Disc. Without going into the explanation in detail, let me say that when musicians hear Beethoven’s idea realized as it is on the recording, they experience a profound shock.

The only way of “dealing” with it is to rethink the Trio as if it were a new piece.  There is nowhere else they can go to fully appreciate Beethoven’s utter genius.  Even those who will resist what they hear or reject it as “impossible” or less beautiful that what they are used to, have an opportunity to hear Beethoven’s intention for the first time, realized by a great orchestra.

*  One of the most startling experiences afforded by this recording is the moment at which the Chorus reaches the grand climax with the threefold statement of the words “zu Gott,” arriving at the thrilling F major chord (notice that the timpani has dropped to the obviously intended but unavailable F). It is clear in the score in the London Library that was used by Sir George Smart at the London premiere that Beethoven changed his mind adding a diminuendo, causing a totally different experience of one of the most iconic moments in the western canon.

Once heard, it can never be forgotten. It provides a perfect transition to the opening of the next section, where the tenor soloist expresses awed amazement at the glory of the firmament above – delivered piano (surely for the first time in any performance and at the Allegro vivace tempo (MM = 84) that Beethoven intended).  The contrast with the banal shouted exhortation to battle which has become the norm could not be more striking, for those familiar with the traditional performance.

*  The treatment of the problematic Finale recitatives is as obedient as possible to the very detailed markings, with results very different from the traditional exaggerations; the blended sonority of just six players allows subtle expression rather than verging on the comic, and matches perfectly the similar later entry of the Baritone.

There are many other things that can be heard in this performance that cannot be heard anywhere else.  It is also true to say that there is no other recording that gathers ALL the instructions that Beethoven left us in one single performance.

That is why it has been considered necessary to provide a double Discussion Disc – a total of 160 minutes – to explain and justify all these decisions. The aim is not to be different for the sake of being different, but rather to present as faithfully as possible Beethoven’s intentions and to explain how some of the discrepancies arose. Some of these elements are controversial, such as the use of a piano to bolster the bass line, as we know was done in the first performance. Some are somewhat fanciful, as when an important and hitherto inaudible thematic element buried in the violas, is made evident to the ear by supporting the violas with added horns.  So, while by far the majority of the surprises are in the matter of tempo, by no means all of them are.

The Beethoven Ninth is one of the most frequently performed pieces of classical music in the world (there will be more performances in Japan at New Year’s than of the Nutcracker in America at Christmas). It is, many would argue, also the most influential work in the entire history of western music.  Some might even go as far to claim that it is the greatest symphony ever composed.  In any event, it seems important to have a performance that faithfully does everything that Beethoven wanted.  This recording could be seen as a message from the composer, urging us to pay attention to his specific performance instructions.   It does not purport to be a greater performance than the efforts of others – that would be presumptuous. But it does set out to be an accurate rendition of what Beethoven said he wanted. It also claims that as a result beauties are revealed that have hitherto remained hidden. That, it seems, is sufficient justification for giving it the widest possible consideration and attention.  It is not the conductor, the orchestra, the choir or the soloists who crave attention, but rather Beethoven himself, asking us, indeed demanding of us, the most selfless, humble devotion to his message.

« You thought it’s gonna be easy, living with an opera singer?

Music book cover of the year »