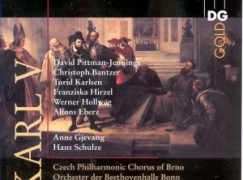 Ernst Krenek was deleted from Europe’s opera schedules in the 1930s, under Nazi pressure.

His epic opera Karl V, commissioned by the Vienna Staatsoper, was cancelled in 1933. It was briefly staged in Prague in June 1938, before being erased altogether.

Bavarian State Opera has just announced Karl V as a highlight of its 2018/19 season.

Aside from festival performances (below), has there ever been a major house staging?