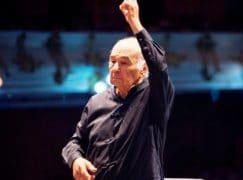 Founder-conductor of the Florida Orchestra and long-serving head of the Orquesta Sinfónica Nacional de Costa Rica, Irwin Hoffman is no more, his wife has announced.

Tributes will be paid today in the national theatre of Costa Rica.

A Koussevitsky student at Tanglewood, Irwin Hoffman was music director of the Vancouver Symphony from 1952 to 1964 before heading further afield to lead orchestras in Colombia and Chile.

His son is the virtuoso cellist Gary Hoffman. His daughter Deborah was principal harp of the Metropolitan Opera until her early death in 2014.

He is survived also by his second wife, the Costa Rica violinist Lourdes Lobo.