The Spanish government has granted citizenship to the Venezuelan conductor ‘for family and cultural reasons’. Dudamel is married to the Spanish actress Maria Valverde.

He has been unable to return to Venezuela since speaking out against the horrors of the Maduro regime.

His change of nationality comes on the day of the death of his Venezuelan mentor, Jose Antonio Abreu, a regime loyalist. 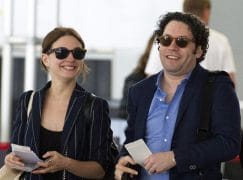