The US mezzo-soprano Samantha Hankey, 25, won the first Glyndebourne Cup tonight, with a cash prize of £15,000 and promises of engagements from several intendants on the competition jury.

She is agented by Askonas Holt and will make her Met debut next year. 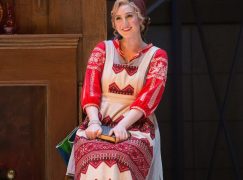