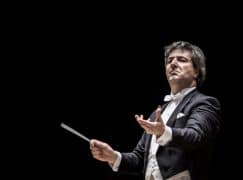 The excellent Winnipeg Symphony Orchestra has been searching for a music director for several months after Alexander Mickelthwaite moved on to Oklahoma.

Last night, they reached a decision.

The new music director, starting in September, is the well-travelled Daniel Raiskin, who holds additional posts with the Orquesta Sinfónica de Tenerife, the Belgrade Philharmonic Orchestra and St. Michael Strings in Finland.

Raiskin, 47, originally from St Petersburg, has made numerous recordings with international soloists. He was chosen on the basis of three appearances in Winnipeg.