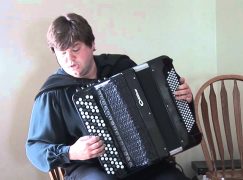 We have been saddened to learn that the Toronto accordion virtuoso Alexander Sevastian, died on Friday in Ajijic, Mexico, a few hours before he was due to give a concert with the Quartetto Gelato. He apparently died in his sleep from a massive heart attack.

Alexander Sevastian started out in Moscow, touting Europe with the Russian Radio Orchestra. Moving with his family to Canada in 2002, he studied at the University of Toronto and joined the Quartetto Gelato.

In April 2008, Alexander Sevastian he played the Malcolm Forsyth Accordion Concerto with the Toronto Symphony Orchestra under the baton of Peter Oundjian,  touring the work across Eastern Canada.

Alex is survived by his wife Anya, their children Vladimir and Maria, his brother Vitali and his mother Nadya.