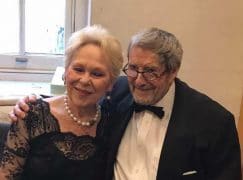 The Met modulates its tune on John Copley

The Metropolitan Opera has amplified its original half-truth on the sacking of John Copley with some further details released to the London Times, following Slipped Disc’s compherensive account.

The Met said last night that Mr Copley allegedly told a chorus member: “I’m thinking of you in my bed with your clothes off,” which left the singer feeling “extremely ill at ease due to this sexually demeaning remark”.

The spokesman said the comment, which was overheard by other singers, led to the chorus member being unable to appear in that evening’s performance of Il Trovatore because he felt upset and distressed. “Peter Gelb spoke to Mr Copley, who did not deny the incident,” he added. “After further discussions with the chorus member, who felt unable to continue working with Mr Copley because of the hostile, sexually charged environment that had been created, Mr Copley was asked to leave the production.”

This argument has been undermined, however, by a statement to Michael Cooper of the New York Times by Leonard Egert, the national executive director of the chorus union.

Egert said in an interview: It’s our understanding that a written apology to the chorister involved and a slight modification of the rehearsal schedule would have been sufficient to resolve this.’…

Mr. Egert said that while the chorister said he did not want to work with Mr. Copley in the rehearsal room, the union believes that he was — and still is — willing to work with Mr. Copley in stage rehearsals provided that their interactions are “limited.” But the Met official said that it would be impractical, and unworkable, to try to limit interactions between any director and performer.

With each successive utterance, Peter Gelb’s hasty decision to fire a director of unblemished record looks ever more misguided and disruptive.

The injustice could still be settled by a Gelb apology, but that appears to be unlikely.

« A vegetarian restaurant with a sensual massage

Martha Argerich cancels US tour for ‘family and health problems’ »