Of all the people that I have worked with, throughout my life, both professionally and otherwise, there is one person who always stood out.

Her name is Benedicte Pesle; she was a visionary, she was capable of envisioning large-scale works and thinking over long periods of time. She had the best critical eye I ever met. She was severe in her dress and taste. She had a great sense of humor. She alone was more responsible than anyone else in bringing American artists to Europe and elsewhere: Merce Cunningham, John Cage, Philip Glass, Lucinda Childs, Trisha Brown, Alan Lloyd, Andy De Groat, my work, and many others. She worked for Alexander Iolas Gallery and often made selections of paintings, sculptures, and drawings for important collections. Especially for John and Dominique De Menil and other members of her family.

She alone helped engineer my 24-hour long Overture at the Opéra Comique, in the first production of the Festival d’Automne and engineering the following work, the seven-day play KA Mountain and Guardenia Terrace: the story about a family and some people changing. She was a driving force behind Rolf Liebermann in commissioning a full evening with Merce Cunningham, John Cage Un Jour ou Deux with sets and costumes by Jasper Johns at the Opéra Garnier. She went with me in 1973 to ask Michel Guy to commission Philip Glass and myself to create Einstein on the Beach, a 5-hour opera. It was Glass’ first commissioned opera. She was the driving force for Michel Guy, who was the Minister of Culture, in all the projects he did in the performing and visual arts. She was always direct and modest and worked behind the scenes. Often no one knew that she had been involved. She was a great friend of the surrealists Matta, Ernst, Tinguely and Magritte. She believed very much in having cultural exchange programs between the US and France and no one accomplished more in the last half of the 20th century than she did with her cultural exchange programs. Often using her own very limited money, she would support events without any mention of her name. Of all the people that I have worked with, professionally and otherwise, I always say again; she was the wisest, she was best. There was no one like her. 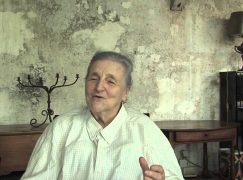 Here’s a tribute from the cultural section of the French Embassy in Washington:

When you know Bénédicte Pesle’s name, it is generally for her outstanding commitment to the work and career of Merce Cunningham since the 1960s, or that of Robert Wilson since the 1970s. People rarely know that she worked at the bookstore La Hune, in Saint Germain, in the 1950s and 1960s before running the Iolas Gallery for a long time. There she worked with Max Ernst, Magritte, Brauner, Matta, Tinguely, Nikki de Saint-Phalle, Martial Raysse, among others.

Having attended the debut of the Merce Cunningham Company in New York in 1953, at the Theater de Lys, Bénédicte Pesle devoted herself to make known, and then promote and circulate the choreographer’s work, first only operating with a close circle of friends and art loving patrons.

She collaborated with Michel Guy on starting Festival d’automne in Paris – in the first brochure of the festival, her title was “assistant to Michel Guy”. Her action and influence soon reached all of Europe, and beyond.

In addition to Merce Cunningham and Robert Wilson, she has made it possible for the European public to discover Richard Foreman, Philip Glass, Trisha Brown, Yvonne Rainer, Meredith Monk, Stuart Sherman, Robert Ashley, Douglas Dunn, Viola Farber and other luminaries of the American avant-garde in theater, music and dance, first while working at Iolas, then from her own office founded in 1972, Artservice International. She described her activity as “Artists’ secretarial office”, and she never qualified her work differently, refusing to be considered an agent, an impresario or a producer.

She chose not to be tied to any institution; she always cherished her independence. She liked to convince others, spread her passions, while working behind the scenes.