First recording: The bits Beethoven left out of his violin concerto

Daniel Auner has recorded some of the off-cuts from Beethoven’s masterpiece.

During my studies in Salzburg I got a copy of the original manuscript into my hands and was shocked about what I found there. Beethoven wrote an alternative solo violin part almost throughout the whole piece and decided just before the first print which version he will use in the end. But, he did not cross out any of the second lines but selected a few bars from the blue ink and a few bars of the pencil writing, always changing….. 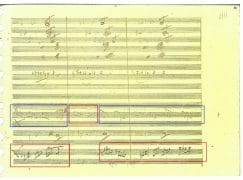