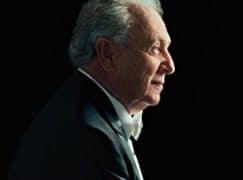 Death of ‘Shoot the Conductor’ concertmaster

The legendary Anshel Brusilow, concertmaster of the Cleveland Orchestra under George Szell and of the Philadelphia with Eugene Ormandy, died last night at the age of 89.

After clashing with music directors, he lit out to Texas, where he became both executive director and conductor of the Dallas Symphony.

He recorded extensively as both violinist and conductor.

In recent years, he published a slam-bam memoir titled Shoot the Conductor.

He was a formidable musician, and a formative one.

« First recording: The bits Beethoven left out of his violin concerto