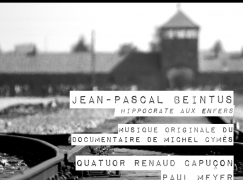 A remarkable new score for TV doc on doctors in Auschwitz

Next Tuesday, France 2 will show Hippocrate aux enfers,  a documentary on the horrific medical experiments carried out on prisoners by Nazi doctors at Auschwitz.

The programme is made by a well-known TV doctor, Michel Cymes, whose two grandfathers were murdered in Nazi camps. As a GP, he cannot understand how German doctors could have broken their Hippocratic oath in this way.

Dr Cymes insisted that the film should have a new score in memory of the victims. He commissioned the composer Jean-Pascal Beintus and asked his friend Renaud Capuçon to record the soundtrack.

The music itself deserves a wider audience.