The tonal composer William Mayer, best known for a prize-winning opera A Death in the Family, died at home in Manhattan on November 17. 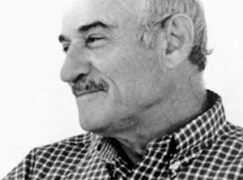