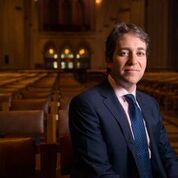 The Cathedral Choral Society of Washington DC has name Steven Fox as Music Director from 2018-19 sea. He will succeed Dr. J. Reilly Lewis who led the chorus from 1985 until 2016.

Washington, D.C. – November 14, 2017 – Yesterday evening, the Cathedral Choral Society announced the four-year appointment of Steven Fox as Music Director beginning with the 2018-19 season. As its third Music Director, Fox will succeed Dr. J. Reilly Lewis who led the chorus from 1985 until 2016. Fox will serve as Music Director Designate for the 2017-18 season.

“We are excited to announce Steven as our next Music Director,” said Thomas Mugavero, Board President and Search Committee Chair, “Steven is a tremendously gifted and engaging conductor. His knowledge and passion for music were evident throughout each stage in our search process.” Fox was selected following a nine-month search process that included 78 national and international applicants.

Chris Markus, member of the Search Committee and chorus member said, “we all agree that Steven is a great fit as the next music director of the Cathedral Choral Society. In addition to his expertise and creative vision, there was an expansiveness in his expression from the podium that showed he would serve as a compelling leader.”

Fox is the Artistic Director of The Clarion Orchestra and The Clarion Choir in New York City, and Founder of Musica Antiqua St. Petersburg, which he established as Russia’s first period-instrument orchestra. A 2017 GRAMMY® nominee, he has appeared as a guest conductor with many renowned ensembles including Philharmonia Baroque Orchestra in San Francisco, Handel and Haydn Society in Boston, Juilliard415 at Lincoln Center, the Charleston Symphony Orchestra, the Quebec Symphony Orchestra, l’Opéra de Québec, Music of the Baroque in Chicago, and the Tucson Symphony Orchestra.

Recognized as a leader in his generation of conductors, Steven has been called “an esteemed director” by The New Yorker and “visionary” by BBC Music Magazine. Of a recent performance with The Clarion Choir, The New York Times praised his “deft guidance” and wrote: “an inspired interpretation. Mr. Fox revealed the drama of the score with vivid dynamic shadings. Intonation and pacing were exemplary throughout the performance.” Fox was named an Associate of the Royal Academy of Music, London, in 2010 “for significant contributions to his field in music.” He has given master classes and clinics at Dartmouth College, Juilliard School, and Yale University, where he served for two years as preparatory conductor of the Yale Schola Cantorum.

“To be asked to serve as Music Director of the Cathedral Choral Society is a great honor,” said Steven Fox. “I feel that there is a strong and positive connection with this chorus and I am personally drawn to both Washington National Cathedral and Washington, D.C. I believe that we will make great music and I am excited to begin our work together.”

« The Berlin Phil played Shanghai Symphony at soccer. After 90 minutes…

Sad news: Death of an important US composer »