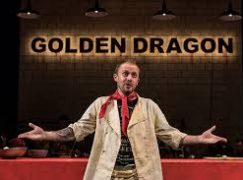 Music Theatre Wales is performing The Golden Dragon by Peter Eotvos. It is set in a Chinese restaurant and has a cast of five, including ‘Chinese mother’, ‘Chinese aunt’, ‘Old Asian’ and ‘An Asian’.

All are played by European singers.

Cries are being heard of ‘another frankly disappointing and incomprehensible case of yellowface casting’.

MTW say the opera is a non-literal fantasy.