Victoria Yellop was given a suspended sentence in July after a judge was persuaded that she had been bullied by a violent boyfriend into burgling a house she was looking after.

Yesterday, she was given another suspended sentence in Kent for causing serious injuries to a motorcyclist while driving under the influence of drugs. She said she had not used cocaine since the accident. 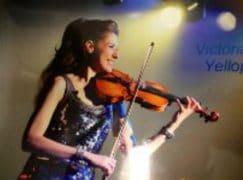