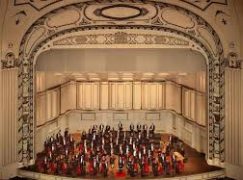 The St Louis Symphony Orchestra is in a good place.

There’s a new five-year contract with the musicians.

Stéphane Denève will succeed David Robertson, who retires after 13 years as music director.

And everything’s coming up roses.

St. Louis, October 16, 2017 – Today, at its Annual Meeting, the St. Louis Symphony Orchestra celebrated the significant artistic achievements and community impact of its 2016/2017 season. The 137th season, which closed on August 31, 2017 with an operating surplus, was marked by inspired performances and growing audiences and partnerships. The operating surplus was a first for the organization this century, after balancing its budget on a cash basis in 2016.

Norman Eaker was elected Chair of the SLSO Board of Trustees. Eaker, a former Edward Jones Executive, succeeds Barry Beracha, whose distinguished tenure was marked by notable institutional and artistic successes including the appointment of President and CEO Marie-Hélène Bernard and of Stéphane Denève as the orchestra’s next Music Director.

Barry Beracha, outgoing Chair of the St. Louis Symphony Orchestra Board of Trustees, said: “The St. Louis Symphony Orchestra is more than just a group of musicians. At all levels of the organization, we are truly committed to enriching people’s lives though the power of music. Serving this national treasure has been a great honor and privilege. As we reflect on all that has been achieved over the four years I served as Chairman and as we celebrateDavid Robertson’s extraordinary tenure this year, I am eager to watch the SLSO build on its legacy.”

Marie-Hélène Bernard, St. Louis Symphony Orchestra President & CEO, said: “I am excited to take this opportunity to reflect on the artistic highlights and institutional milestones of the past year. I want to thank Barry Beracha for his tireless and devoted leadership. I also want to welcome Norm Eaker to his new role as Board Chair. Given the SLSO’s current momentum on all fronts as we celebrate David Robertson’s tenure and the orchestra’s 50 years at Powell Hall, the SLSO is well positioned to build on a legacy of artistic excellence and institutional stability.”

In January 2017, the SLSO and the American Federation of Musicians, Local 2-197, settled on a new five-year labor contract. The agreement was reached seven months early, providing over five years of labor stability for the SLSO. The new contract runs through August 28, 2022. Additionally, the SLSO settled a new five-year agreement with its stagehands through IATSE.

« Who got this cellist to play 140 concerts a year?