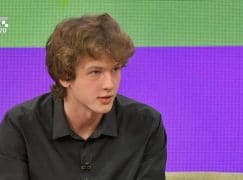 Krpan, 20, will graduate next year from the Zagreb Academy of Music. His father is a prominent violinist, his mother a musicologist. The prize is being hailed in Croatia as the country’s greatest musical triumph for a generation.

In the last five Busoni contests, the first prize was only twice awarded, a token of its high standards.