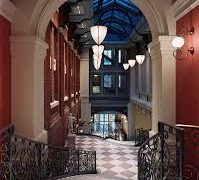 America’s oldest conservatory of music is getting a reboot.

He says: ‘I’m reasonably sure that there has never been another academic year with so many new faces, perhaps since Peabody’s beginnings. You’ll hear about these individuals as the year unfolds.’

So no new names for the moment, and no names of the teachers who are being replaced.

At least one Baltimore Symphony player has been dropped, we hear.