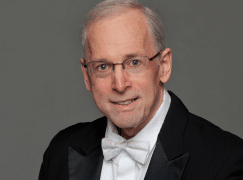 US orchestra in mourning for principal horn, dead after car crash

The Columbus Symphony* has released sad news of the death of Gene Standley, its principal horn since 1990.

Gene was involved in an auto accident on August 25.

The son of two French Horn players in the Pittsburgh Symphony, Gene studied at Curtis and played in the Philadelphia Orchestra in the 1980s before moving to Ohio.

He survived a bout of cancer three years ago.

Our sympathies to his grieving family and colleagues.

* An earlier version of this post mistakenly stated ‘Columbia Symphony’. We apologise for the unfortunate error. A GoFundMe appeal on behalf of the family to help with hospital expenses has now been taken down.

« Houston Symphony players get out among the homeless

Death of a Martha Graham composer, 96 »