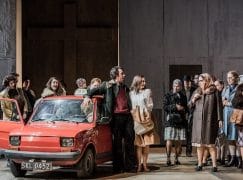 Opera North’s new production of Cavalleria Rusticana is set in rust-belt Poland of the 1970s.

That’s the kind of time warp and place warp that directors do these days.

Karolina Sofulak says: ‘Poland is a deeply religious country which was occupied for centuries by various foreign powers, and in this respect it’s very similar to post-Risorgimento Sicily, the original setting of Cavalleria rusticana. I’ve been drawing on my own experiences and my family’s experiences of growing up in an intensely Catholic and economically deprived country – where everyday hardships make people turn towards the dreaminess of religion, make them filter and channel their desires and frustrations through obsessive faith.’

But someone must be aware that there are a million Poles living in the UK, many in the north of England where Opera North is based. This could prove an irresistible magnet to get them into the opera house.

« Maestro move: An American in Brno

Radio orchestra is robbed of its instruments »