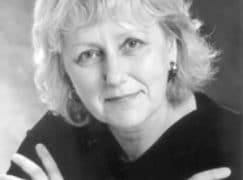 The international mezzo Ameral Gunson died on Friday night of cancer, her husband has reported.

Starting out in the BBC Singers while studying with Otakar Krauss, she became a soloist with the leading UK orchestras and quite a few abroad.

She appeared at the Royal Opera House Covent Garden and at the opera houses in Helsinki and Turin.

In later life, she was a much sought-after teacher.

End of history: A quartet legend has died »