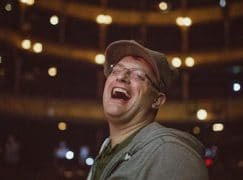 Musicians are reporting the death of the British opera director, Lee Blakeley.

Lee was a regular at Santa Fe Opera, where his US career took off. He gave the French premiere of Stephen Sondheim’s Sunday in the Park with George at the Theatre du Chatelet.

He worked extensively at Glyndebourne, Covent Garden, ENO and Scottish Opera, as well as Wexford, Canadian Opera and Minnesota.

The Icelandic tenor Ólafur E Rúnarsson writes: ‘He had a huge impact on me when we worked together in the RSAMD. During the production of La Calisto in 2002 I was kicked off my bike and broke my leg quite seriously (not during a rehearsal) and couldn’t take part in the show. Lee was the first to visit me in the hospital with chocolate, soft drinks, his warmth and compassion. The following weeks he advised me about criminal benefit compensation and many other things, helpful for a foreigner on his own. This I will never forget. I send my deepest condolences to his family and friends.’

UPDATE: Lee died on Friday from a sudden condition.

« Sudden death of US principal oboe, 61